Congratulations to all who participated and joined the Goldilocks 45th Anniversary Fun Run 2011. Race Results are now available for viewing!

For now please feel free to share your feedback and comments about this event here! 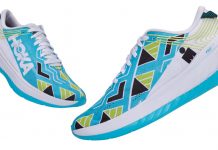