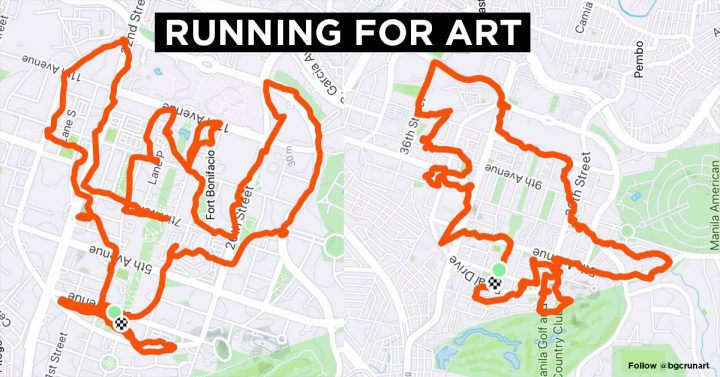 Let’s face it, every new year, there is that slight or highkey pressure to do better or be more consistent at what we do. As much we are saddened that the pandemic still is not over, there should not be any room for excuses to laze around or set aside those fitness goals you have always wanted to achieve.

During our search for an inspiration to make runs more fun, we found a runner from BGC who makes art out of his runs. He has been doing it for a while now and it has made his runs during the pandemic a lot more exciting and purposeful, focusing on drawing his run art rather than the distance or pace he covers.

How does he do it? In our short conversation, he said he does it by drawing out his figures or art on an app called “Sketch” and by using a map of BGC that he got from Google maps. “It also helps to know the parking lots and open lots in the area, as sometimes I need to veer off the roads.” He advised.

The process of creating more detailed drawings requires knowledge on the unique road features of the area, in his case… BGC. The challenge is to find the connections, and when he finds them, the figures then get more details like ears, tails, and etc.

After this he plots his route in his memory. Although he tries his best, he admitted that there have been times when he made some wrong turns. He suggested that instead of just memorizing the streets/roads, noting and visualizing the landmarks (e.g. turn at Lexus, right at Uniqlo, etc.) will make it easier.

With his new found passion, he doesn’t focus on the run distances anymore, but he is still forced to complete around 8-10K to complete his run drawings. Currently, his objective, is to simply make running more fun by creating art. For him, the reward is being able to see his art plotted on the map. So if you’re looking for an inspiration and wish to take on his challenge, check out his artistic runs on instagram @bgcrunart .

Now it’s time to GO AND TRY it out yourselves, and show us how creative you can get wherever you are. Don’t forget to tag us at @pinoyfitness