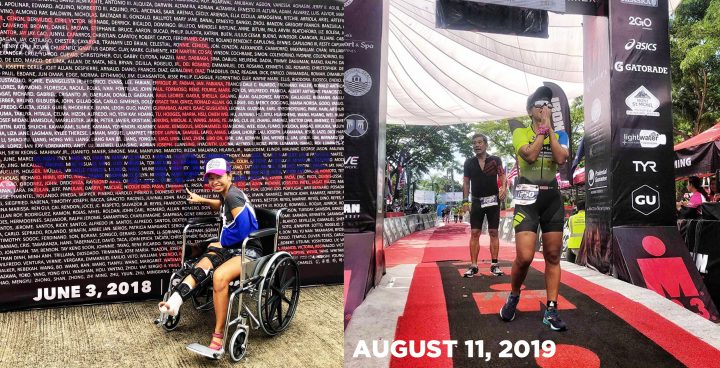 Not all recovery stories are borne from the same premise that athletes get injured during a competition or training — a case that is normal for any athlete. Much like anyone else, athletes can get into unfortunate accidents outside the realms of the training and competing grounds. Dane Zamudio was no exception to the rule.

One night on the way to a race, Dane and her companions were making their way to yet another weekend race. Everything in the air spelled ‘normal’. Everything about the trip was a routine they’ve come accustomed to on weekends: Pack the gear, travel to the event grounds, get ready to race, give it your all, and finish. Or so they thought.

An off-routine stop at a curb on the road, a few minutes of quiet, the flash of a pair of headlights in the dark of the night and Dane, along with one companion of hers, gets hit by a drunk driver.

Being an active triathlon racer, Dane surely had plans to participate in more events before her unfortunate accident. Her accident had happened in May 2018, and in between that time and today as she comes out fresh from finishing her first Ironman 70.3 since then, Dane tells us the story of the struggles of her recovery.

With the costs from hospital confinement and surgery piling up, and a recovery period of at least 9 months, Dane had to park all her plans – racing included. If not for the help of her friends in the triathlon community who organized a fund-raiser for her, Dane would have struggled with paying off her hospital bills, and until her doctors gave her clearance, racing was out of the question.

All-in-all, from the time it took to recover from her injuries and to settle her dealings with various hospitals and clinics, Dane was away from the racing and training scene for almost a year.

Itching to Get Back on the Saddle

2018 was a long year of treatment and therapy for her. If not for the patience and discipline that she developed from triathlon racing, she says she would have gotten really impatient and might have even given up.

But tenacity is one other strength Dane possesses, and in tow with that was an optimism that helped her keep her head high and push herself through therapy sessions. “August last year pa lang nagtatanong na ako if pwede na ‘ko mag swim,” Dane says with a laugh, as she looks back at days of therapy when she was itching to get back to training.

“But I can’t kick daw. So sabi ko, ‘then I won’t kick! Arm stroke na lang muna,’” she adds, to tell me how she negotiated with her doctor to get started on training.

Come February, a milestone came for Dane, with the doctors giving her clearance to bike. And that was enough for her, for the meantime.

From then on, it was one recovery milestone after another for Dane, as she raced the Vermosa Aquathlon in March 2019 and finished second in her age category. Shortly after that, she registered again for the Clark Global City Duathlon to commemorate the anniversary of the drunk driving accident. And by June and July, Dane was already back in the triathlon scene, joining sprint and long distances, respectively.

“Medyo baliw ‘no?” Dane inserts as I was left in awe and lacking for words with which to describe how tenacious she was. I told her I’d rather call it ‘determination’ or ‘obstinacy’ at the very least, but not crazy. Because wouldn’t that be exactly what any other passionate athlete would do? Not settle for ‘no,’ and get back up to train and race, because of the love of the sport.

With a serious tone, Dane says, “I really like the feeling na accomplished ka right after a race. Tapos if I did better at a PR, or whatever, I feel really proud and accomplished. I love pushing my body to its limits when it comes to training and racing.”

“This isn’t the last chapter of my road to recovery.” That’s the final note on the caption for this photo that Dane posted on her Instagram the day she finished Ironman Cebu last August 11, 2019. Asking her about it now, she says, “I signed up for a full Ironman for next year,” answering with all the enthusiasm of a person so far from the repercussions of a drunk driving incident.

It made me wonder what she had to say to the person who gave her all the feelings of frustration during her rehabilitation process. I let the question out. To which she answered, “Ang gusto ko lang sana is may natutunan siya from that. I don’t think she knows kung gaanong kalaki yung effect ng ginawa niya sa ’kin.”

She admits that she still feels a little bit of resentment towards the person who hit her and her companion. But with a forgiving and firm voice, adds that, “She saw me nang okay na sa courtroom. I hope na ‘yung girl, and other people like her, realize that their irresponsible actions can have great consequences, hindi man sa kanya, pero to other people.

At the end of it all, Dane wanted to stress that these kinds of things happen to a lot of people and that, most of the time, it happens to people who are not as fortunate as she was to get help for treatment, or had developed the same level of self-discipline she got from triathlon.

“I encountered other people who went through the same thing. It’s really hard–especially the recovery–not everyone has the patience for it,” she tells me.

As words of encouragement for people who are recovering from the same thing as her, Dane says: Sana hindi sila mag quit on the recovery therapy because it will really help a lot as it helped me. I wouldn’t have been able to finish my Ironman without it.

“Just. Don’t. Quit. If you really want it that bad, nothing can stop you.”

Like a true sportsman with the firm resolve to only let this setback launch her further into more success, she ends our talk by saying, “Just. Don’t. Quit. If you really want it that bad, nothing can stop you.”

This year, Dane finished her first Ironman 70.3 since her accident, with an official time of 7:46:00. Next year, she hopes to do better, continually promising herself to accomplish anything she sets her sights to.

Congratulations on the strong finish, Dane! You’re truly an inspiration.