Up Close and Personal with Chris “Macca” McCormack

I was certainly surprised when Pinoy Fitness asked me to head to Under Armour Greenbelt 5 last Saturday to meet THE Chris McCormack (fondly called “Macca” by his fans), THE 2-time Ironman World Champion. As a new triathlete then, it was inspiring, and wildly interesting, to have read his book “I’m Here to Win”. It was essentially his race playbook detailing his thoughts and strategy on racing, his quests for the Kona wreath crown, and his struggles later on to earn a spot in the Olympics. Needless to say, athletes, myself included, look up to this man and his accomplishments and try to emulate his champion outlook. His increased appearances in Philippine races have likewise amplified the Pinoy triathlete community’s affection for him. I had the chance to chat with him about what lies ahead for him.

More Fun in the Philippines

Macca had just visited the Balesin Island in Quezon Province when we interviewed him. He was amazed with the beauty of the place and shared that he has always enjoyed the Philippines, and much more when racing here. “Since I now live in Thailand and have work at Singapore, Philippines is very close and I would love to race here again. Triathlon in the Philippines is building up and currently has the strongest presence in South East Asia. Ironman 70.3 Cebu has always been a wonderful event and it would be great to race again and see other places in the Philippines.”

Macca the Athlete, Macca the Coach

When asked about his racing plans, Macca said that his professional racing has taken a backseat for now due to his upcoming plans for the world triathlon series event he is setting up (more on that later). He also mentioned that he is more of a coach now, with his wife being interested in the sport. “She is quite excited with competing. I asked her why she has never done triathlon with me and said that I have always done the long ones and she didn’t see herself doing those kinds of races. We found a sprint race to be held in Thailand and started training for that. We try to do at least two sessions everyday. While a sprint distance doesn’t require as much training as I needed with long distance racing, the need for consistency is the same.”

We touched upon the topic Macca X, the online coaching program which he developed for athletes of all abilities. With a growing triathlon presence in the Philippines, many have recognized the need for proper guidance and development. There is value to smarter and guided development that eventually translate to improved performance, and some Filipino triathletes have sought the program exactly for that. “There are eleven Filipino athletes currently training with us! Macca X is really a community. With 13,000 members worldwide the aim is to provide access to information, resources, expert advice…the same way that I did as a pro athlete.” Advice given on nutrition and gear is as much as possible neutral. “While everyone knows Specialized and Under Armour have been helping me as an athlete, and with the best products at that, we coach and advise with a neutral perspective.” Nonetheless, he recognized that as an individual athlete, the journey has been great with his partnership with Under Armour. “It has truly been a great partnership. Under Armour helped me in my entire career, helped me solve issues like with Heat Gear for Kona. We also design and develop products with a true ‘athlete first’ approach.”

A Super Hero for the Super League

Part of Macca’s advocacy to give back to the sport, his ambitions brought him to developing Super League Triathlon, a triathlon world series for the best of the best athletes, with big media exposure, premium sponsorships and purse. “It’s a triathlon series where you put the best fifty athletes — ITU champions, world champions– let them compete in a brutal course shown live worldwide. We want to launch it here in Asia, it’s where I live and I think it would be great, and potentially hold an event here in the Philippines. I think it’s how I can give back to the professional athletes.” 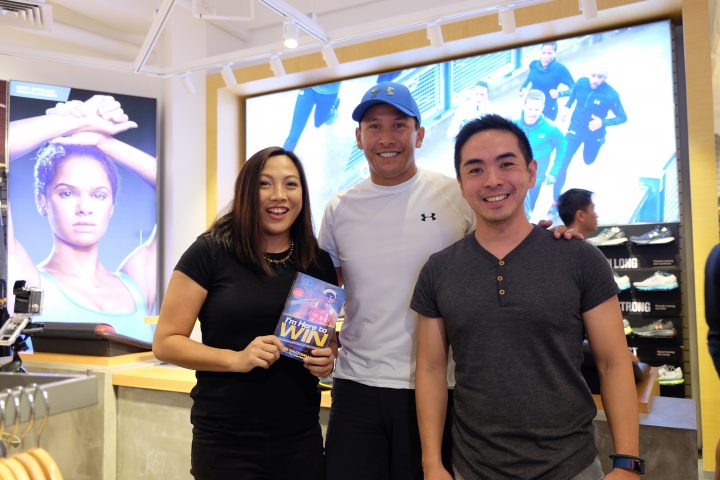 Anyone can be a Winner

To end the short chat, we asked him to give advice to aspiring champions. Macca encourages them to chase their dreams and be inspired with his story.” I could have easily been a banker or have gone with another profession, and there were always people warning me, but I am thankful for the decision I made because triathlon had shaped my life and had made me fulfilled. Success comes with hardwork, commitment and belief, but belief is the most important.”