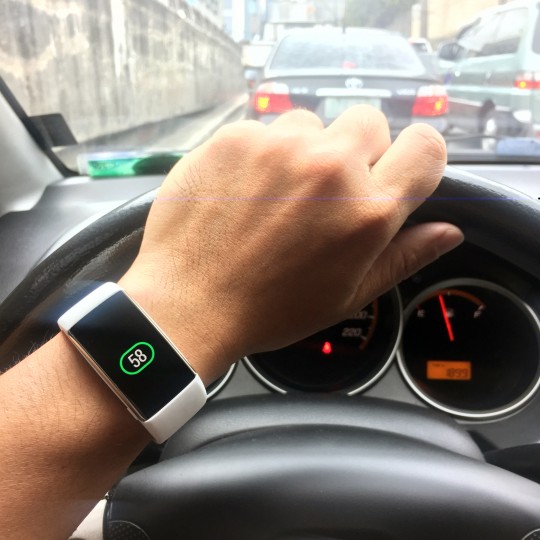 The A360 is the first optical HR sensor fitness watch released by Polar, and I have to be honest, when I first received the demo unit, I was both excited and bit skeptical about the performance, since based on previous experiences with other optical HR sensor devices, there’s always been an issue on accuracy.

For those unfamiliar with the technology, optical HR sensors uses 2 flickering LED green lights at the back of the watch that detects your heart rate, this technology is meant to be a replacement for the traditional HR chest strap, which I can definitely do without, so I have high hopes that I can do HR Training without the chest strap pretty soon.

For the Polar A360 Basics, Watch the Video:

First, I tested the Polar A360 for running, please note that the A360 does NOT have a GPS, so it basically measures heart rate and activity, so if you notice the workout summary does not provide any distance, speed or pace, just the heart rate.

To do the test, I strapped on my Polar Bluetooth Chest Strap that can broadcast to the treadmill and then compare the results. I started with easy and running steady was actually quite impressed on how the A360 was able to accurately measure my heart rate.

After a few minutes I decided to test it with some intervals, here I noticed that the A360 having some delay on adjusting to my recovery heart rate, it took a few seconds longer compared to the HR Chest Strap. It seems like in fast changing heart rate conditions, the A360 still needs some improvement.

What I also miss in the A360 is the ability to toggle laps, the watch only provides the basic start and stop, so when doing intervals, you have to count the laps manually.

I also tested the A360 during my core and functional training in 360 Fitness which normally involves a lot of interval sets, I immediately noticed the same thing, for short sets of fast varying heart rate, the A360 is a bit slow to react.

Tried the A360 for some indoor cycling exercises, and on a easy and steady spinning the A360 was once again pretty accurate on the HR results.

Yes, I even tested it while swimming. It’s the first time I was able to have a device that can get my heart rate while swimming so I have no idea on how accurate this is, if you notice the chart above, the last 5 sets where sprint sets, the graph looks decent but accuracy is still questionable.

But hey, it’s my first time to record my HR while swimming, I find that quite cool. Though I really kind of wish they would add a lap counter pretty soon.

The Polar A360 is available in RUNNR Stores and Toby’s outlets nationwide.