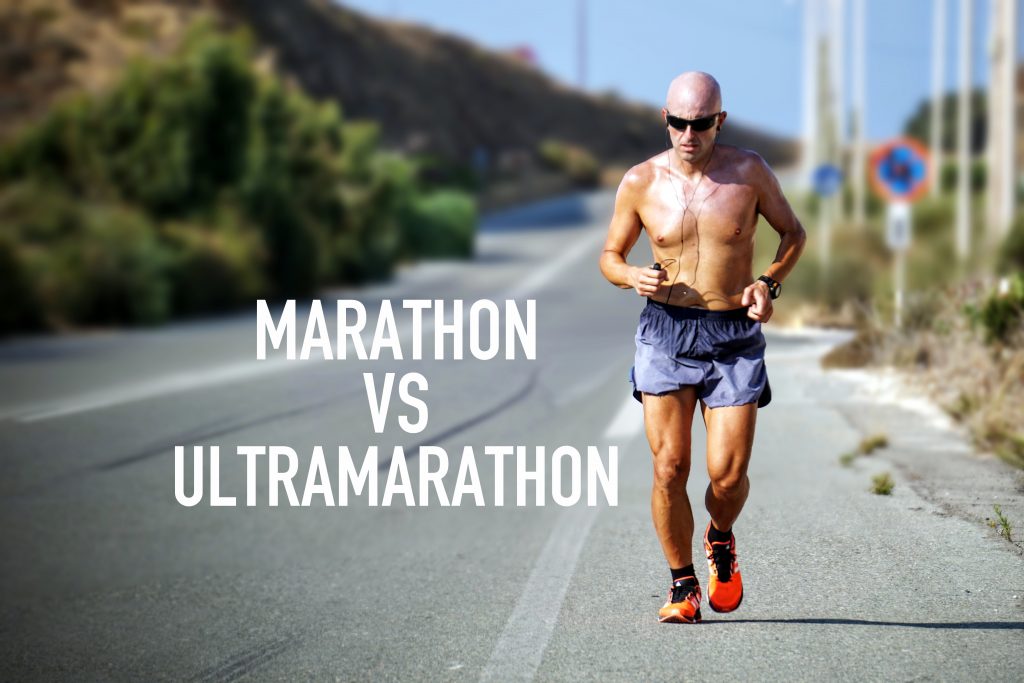 Marathon vs. Ultramarathon what’s the Diff?

We’re all familiar with marathons. You know, the 42.195K run? But just when you thought that was the longest distance a runner could go, there’s suddenly this thing called the Ultramarathon. Yes, there’s such a thing and it’s for runners who decide to go farther than the marathon distance.

Is it for you? Maybe, and maybe not, but for those who are curious, let me list down the differences as there’s more than just the distance that sets the marathon and Ultramarathon apart.

Depending on the program you choose, an ultramarathon plan can include these components too, but tends to focus more on the time spent on your feet or endurance rather than speed.

An ultramarathon plan usually gives more importance to the required total weekly mileage which includes the LSDs, back to back runs and even bonk runs. Longer runs and bigger mileage requirement means you’ll be spending more time running on the road as compared to what a marathon training plan requires.

Temporary road closure, orange cones to reserve a lane just for you to run on, well lit routes along city streets and marshals to guide you is what you’ll expect in marathon events.

You won’t be finding any of these in ultramarathon races except for maybe some marshals every few 10s of kilometers in some races as others have none at all. Equipped with blinkers, reflectors and headlamps for your own safety, you’ll be running at your own risk towards the incoming traffic of tricycle cabs, motorists, cyclists, huge trucks, jeeps and cars.

Don’t forget the stray dogs you may also encounter who either just bark at you or chase you to a faster pace. Both however, usually have ambulances on stand by.

Given the difference of distance between the two, marathons can be completed much faster than an ultramarathon. When running a marathon, most run it to achieve a decent finish time and every single second counts. Yes, every single second.

Ultramarathons are done at a much slower pace. The longer the distance, the slower the pace. You simply cannot use up all your energy and glycogen reserves at once or else you’ll suffer for it later on.

One runner once said that a marathon isn’t a social run where the best you can do when you see a familiar runner along the route is give a nod or call them out and carry on.

As for ultramarathons, most runners usually find the time to mingle with other runners, even taking breaks as they try to complete the distance. You rarely will you see runners taking long breaks at the side of the route of a marathon.

For a marathon, a runner can survive with just energy gels and electrolyte drinks and probably throw in a banana.

During ultramarathons however, runners rely more on real food such as boiled eggs, assortment of fruits, sandwiches or probably even a complete meal during the really long ultras.

Both marathons and ultramarathons have cut-off times. Marathon finish times however, seem to have a better runner recall than that of an ultramarathon where simply finishing the distance is enough.

Portalets are usually distributed throughout the race course of a marathon.

Ultramarathons don’t provide these and you’d make do with the comfort rooms at gasoline stations or other open establishments, use your charm to talk your way into letting homeowners use their comfort rooms or just hide behind the bushes or secluded area.

Support vehicles support their runner all throughout the race course by providing their needs every couple of kilometers or so, whether it be hydration, food, change of clothes or even a good massage or stretching.

As there may be many differences to running a marathon and an ultramarathon, a common denominator and the most important one of all, would be the “runner” who has the will and determination to finish what they started.