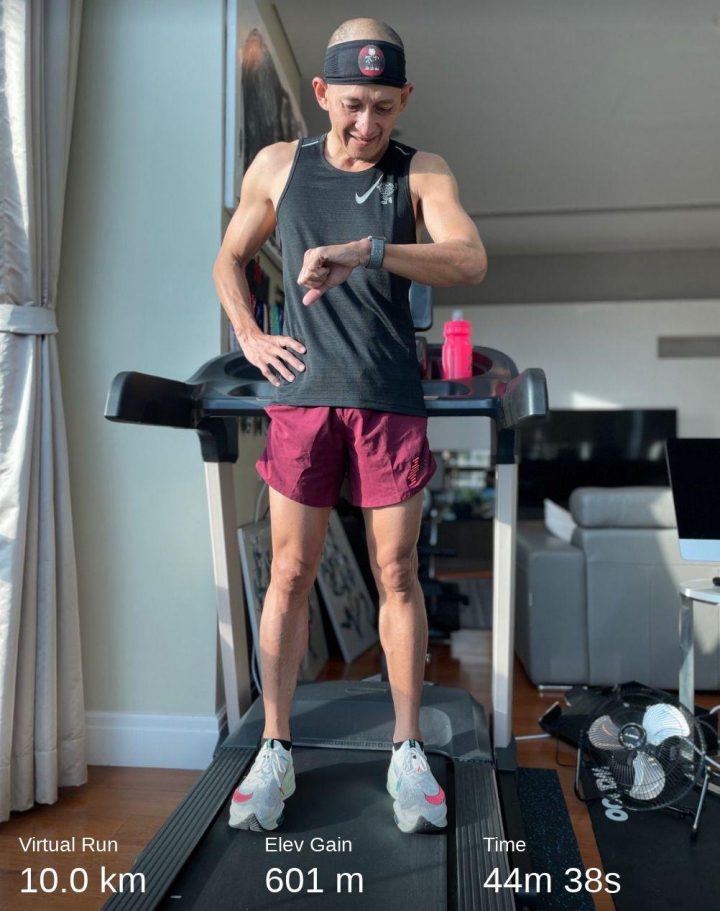 Even the fittest and most disciplined people we know were physically and mentally affected by the pandemic. Triathlete and coach Norman Pascual was not an exception. The pandemic took a toll on his well-being but with sheer determination, he was able to turn things around and achieve the level of fitness he always aspired to have.

“I didn’t stop working out,” says Coach Norman. Even if he was in Bangkok since March 2020, he gets to train everyday with his students during online coaching sessions.

But his diet was different story. 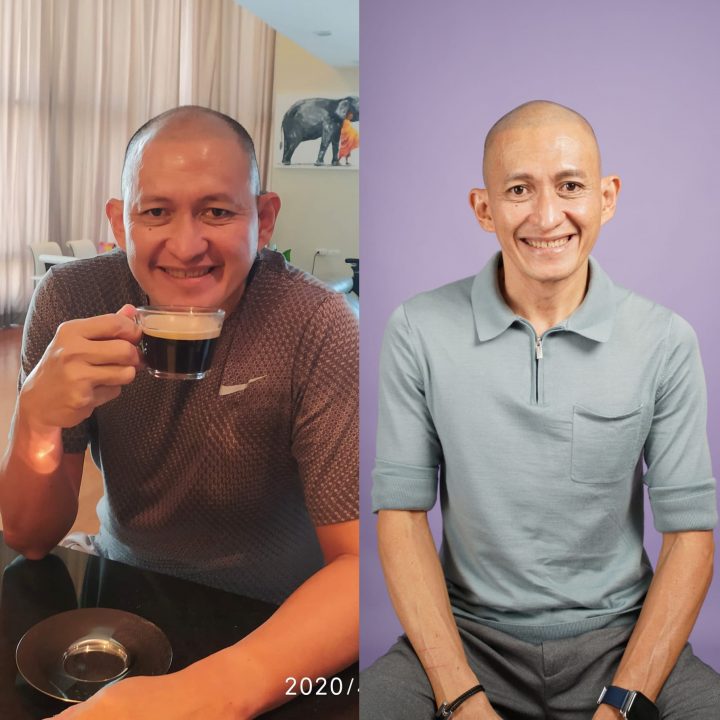 He was initially in denial. “I was always complaining na ang laki ng tiyan ko, iniisip ko baka bloated lang ako.” So he tried to cut back on salty food and carbonated drinks.

It did not work, though. “One month na, wala paring nagbabago.”

By July, he finally came to the conclusion that yes, the weight gain was not healthy and he had to change his lifestyle.

“Ang pinaka-una kong in-address was my nutrition,” Coach Norman shares. He started to monitor his calorie intake. “I identified kung ilang calories ang kailangan ko for me to lose weight.”

He geeked out and did a lot of research. What the literature told him was simple enough: If you eat more calories than what you needed, you gain weight; if you ate less than that, you lost weight.

Upon establishing that his body needed 2,200 calories a day to maintain his weight, he decided to consume only 1,700 calories daily. This translated to a 500-calorie deficit. Working out allows him to burn 300 calories; his total calorie deficit therefore, was at 800.

He did have cheat days, but he never went beyond the recommended amount of maintenance calories.

While he did lose 36 pound in a span of 5 months (July – November 2020) sticking to the plan was a constant struggle. “Feel na feel ko talaga na deprived ako sa pagkain,” he shares. It did not help that he also had a sweet tooth.

He then decided to take a “diet break” by the end of November and just consume enough calories to maintain his weight. 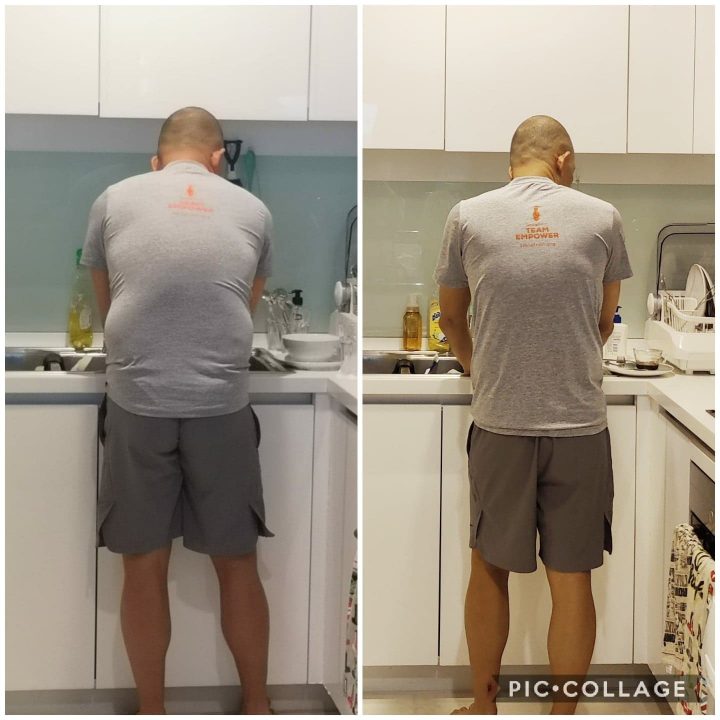 By the time his birthday came along (March 2021), Coach Norman started the second phase of his fitness plan. “I simplified the process to make it more sustainable.”

He simply went back to eating less calories than what he needed; complicated calculations were no longer necessary.

He also learned how to cook and bake; this allowed him to modify ingredients to meet his nutritional needs.

“Mas masipag na rin akong mag-log ng data,” he smiles. He weighed himself daily to establish trends. Was he actually losing weight? How much was he losing each week?

He also added resistance training to his workout routine to build and maintain muscle mass.

He is currently at 132 pounds and is aiming to lose five pounds more by the end of June. He enjoys running more now, and is injury-free.

If there’s anything the pandemic taught him, it’s that it’s okay to slow down and take care of himself. 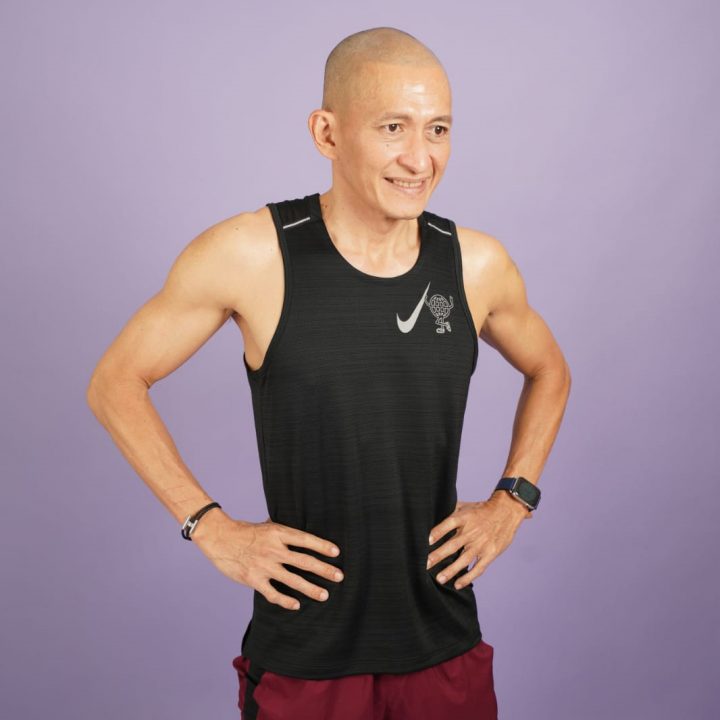 Realizing What Was Important

Since there were no triathlon races to prepare for, having a fitness plan allowed Coach Norman to set goals.

“Without goals, mawawalan ka ng motivation to accomplish anything,” he says. His fitness plan also added structure to his day, something everyone craves for given the uncertainties of the pandemic.

If there’s anything the pandemic taught him, it’s that it’s okay to slow down and take care of himself.

“Bago mag-pandemic, I had a lot of things in my plate kaya yung mga importanteng bagay hindi ko nagagawa.”

“Dati hindi mo ako mapapaluto kasi wala akong oras,” he shares. Now that he has the time, he can be more mindful about his nutrition and health. Aside from eating right, he also gets to sleep for at least 8 hours daily.

A post shared by Coach Norman Triathlon U (@coachnormantriathlon)

He also makes it a point to dress up each day. “’Di ba tayong mga Pinoy may pang-bahay at may pang-lakad?” he laughs. Wearing his “pang-lakad” gives his mood a much-needed boost.

“We also have to change our mindset,” he says. “Instead of waiting for the situation to go back to normal, accept the reality that this is the new normal. We have to adapt.”