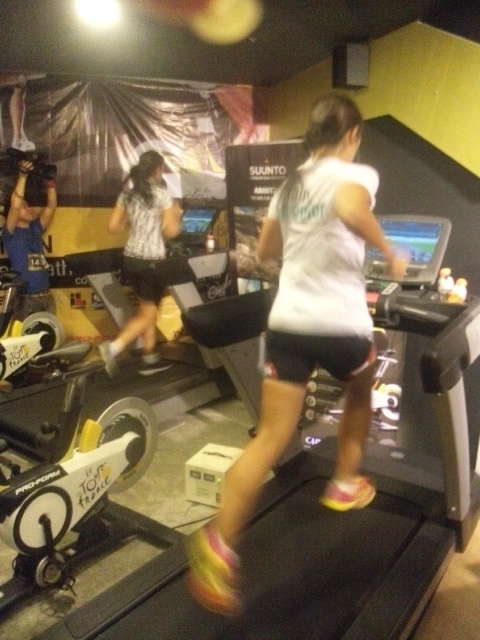 Who would have thought a duathlon competition is made possible less the pollution of the outdoors, uncertainty of weather and safely done indoors? Why not, right? 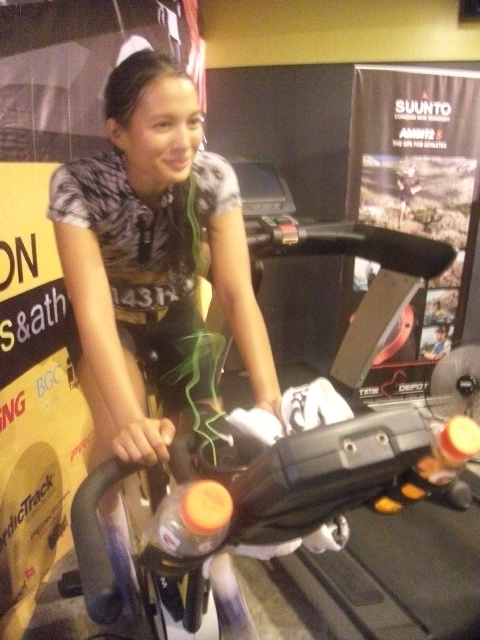 Commercial model, host, actress and budding triathlete Isabelle Daza gamely took the challenge and so did two of her friends.

An exciting mix of media, product sponsors, bloggers, triathletes, duathletes and sports personalities witnessed the event, organized by Bike King and the very busy but bubbly Ms. Arleen Lindo, Marketing Manager of Chris Sports/F&A. Both Arleen and Mr. Gilbert Tang, Managing Director, Chris Sports was very grateful and thankful for the presence and support of all the guests who took time to come and witness the event. 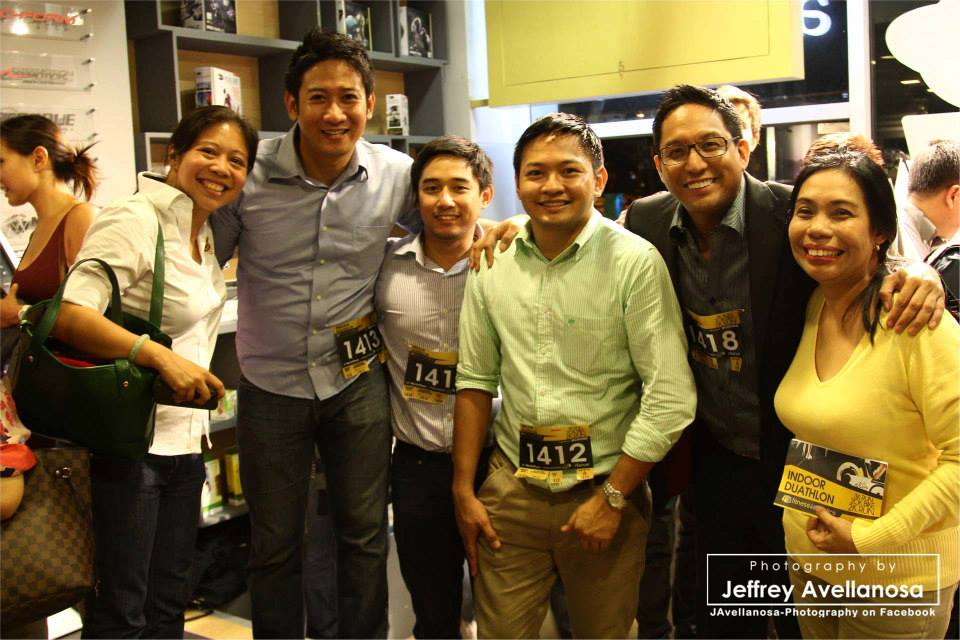 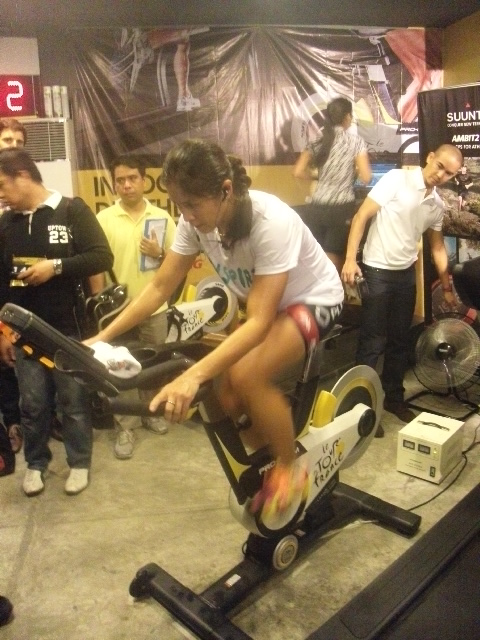 The Intensa Treadmill Entertainment Series and Pro-Form Tour de France trainer bike were put to test as all three dished out their competitive sides. Gonzalez and Huelgas are fast runners, superb spinners on the actual road and confessed had extra challenge completing their 20K bike part. “The bike part was hard but I’m glad I did it!” shared Sandra.

Daza initially wanted to only do 10K bike but later on pushed her limit and gamely completed the second half and requested the crowd with a smile saying, “No judging” (Her performance). Great job, Isabelle!

Very nice raffle prizes from Yurbuds earphones courtesy of distributors Gianina and Maiqui Dayrit of Cascos Inc. were given away alongside travel bags and the latest sports watch from Suunto. Congrats to all its lucky recipients!

Inspite the event being held indoor, F&A made sure there are on-hand marshals monitoring one’s performance and other needs. Official timer is Suunto while Gatorade took care of hydration. 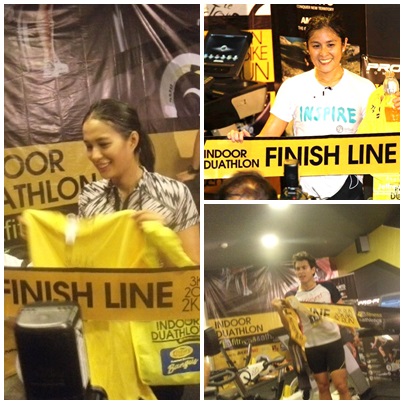 There was also an actual finish line tape which Sandra, Isabelle and Nikko may not have expected as soon as their indoor race was completed. And of course loud cheers, applause and congrats from the staff and crowd. A very brief awarding Ceremony immediately followed. Congrats guys! 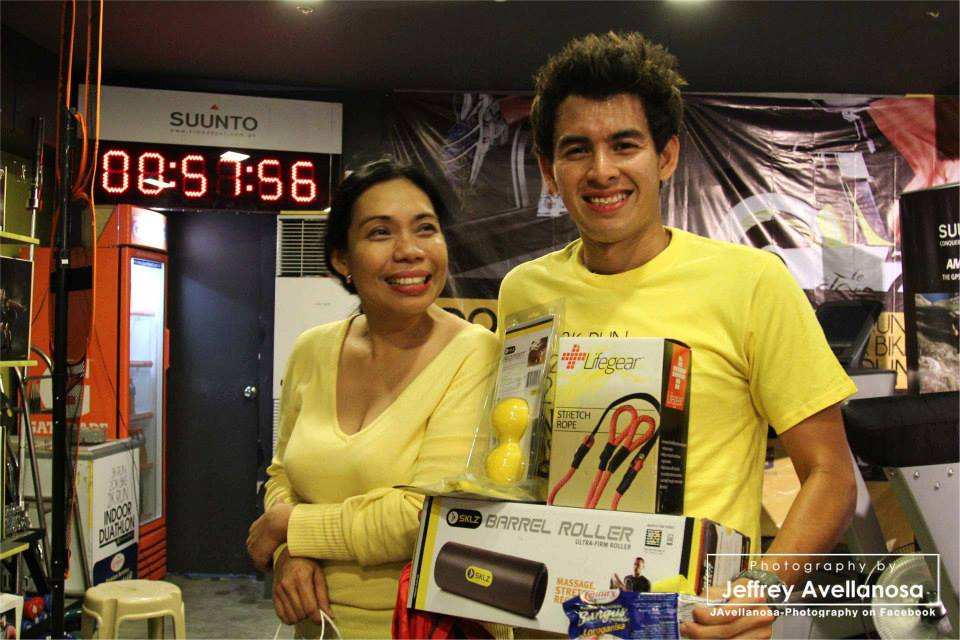 The elite challenge was extra special for triathlete Nikko who finished at only 57 minutes 56 seconds, because it was his 22nd birthday the following day, July 19th. Ms. Arleen handed over extra birthday tokens which consisted top of the line recovery tools. “This is so far the best birthday I’ve had,” beamed Huelgas.

Inspired by their experience? Don’t have a bike? Rainy Weather? Don’t let it stop you! To all interested and aspiring duathletes, come and join this ongoing event until August 31, 2013, register now and view its mechanics Click Here and get a chance to win the Pro-Form Tour de France trainer bike!

This is one unique challenge where you can book and schedule a duathlon at your availability and convenience. So let’s run – bike – run… indoor-style, NOW!

Many thanks to Ms. Arleen Lindo of Chris Sports/Fitness & Athletics and PINOYFITNESS for the chance to cover this event.