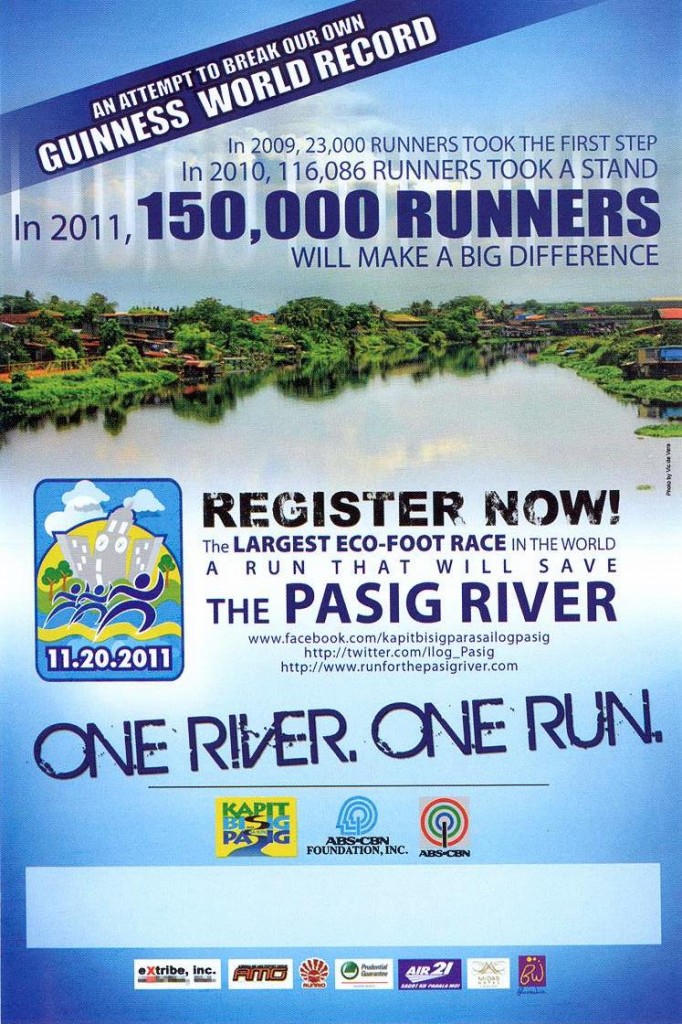 The Run for the Pasig River Team just recently announced that the original plan of having an RFID for each participant of this year’s Run for Pasig River 2011 will no longer push though, instead they have decided to add the funds for the RFID’s to the rehabilitation program of the River. Check out the complete announcement in the press release below.

The race committee of this year’s “11.20.2011 Run for the Pasig River” has decided to forego the use of radio-frequency identification (RFID) due to cost and reliability concerns.

Although RFIDs have been used in many races in the Philippines, there is no race or equipment available in the country that can handle the magnitude of this advocacy run. The amount of equipment required to accurately count all the expected runners posed many technical concerns. Actually, in the beginning of the year, we considered flying in equipment from abroad but it would cost ten (10) million pesos. Using the technology available in the country with minimal importation, though, would still cost four (4) million pesos.

The Board of Trustees felt it is money better spent if we instead use it for the rehabilitation of Estero de San Miguel and the other esteros which drain directly into the Pasig River. We have rehabilitated Estero de Paco; we can do it in the 46 other tributaries of the Pasig River. (To view before and current photos of Estero de Paco, please click this link: https://on.fb.me/esterodepaco)

For a precise tally of the runners, an independent auditing firm–SyCip, Gorres and Velayo (SGV)–will manage a team of 360 counters in chutes near the finish line to make sure you are counted as part of the effort to help save the Pasig River.

We truly hope you understand our decision on this matter. And remember: this is an advocacy fun run, not a race! Let’s all go out there to have fun running for the Pasig River!