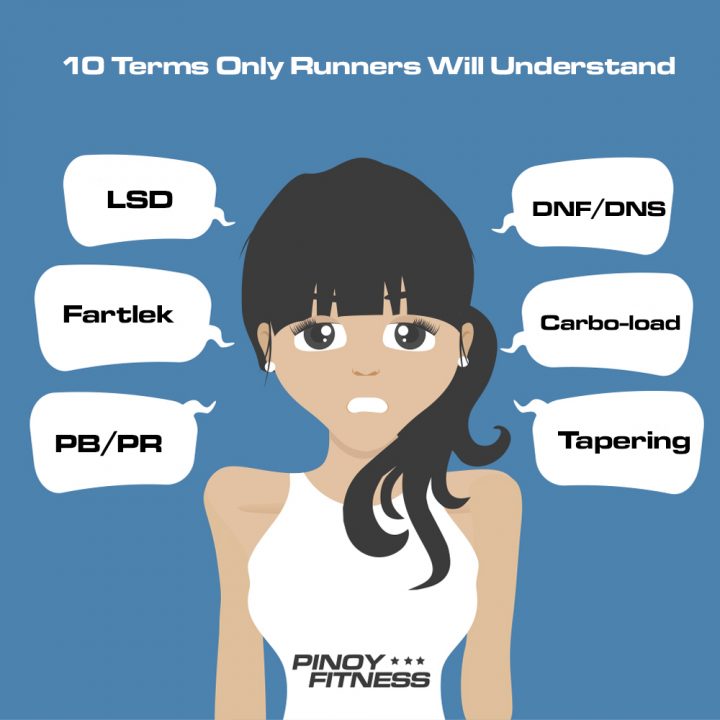 When I first started seriously running in the last quarter of 2016 to prepare for my first full marathon in 2017, I didn’t know much about the technicalities of running. What I knew then is that I want to run and I can, somehow, run.

So when I signed up for my first marathon, it was the start of my deeper understanding of running as well as the science behind the running lifestyle. The more that I get to run, the more I know that there is so much to learn about running.

As I delve deeper into it, I learned terminologies that runners use in normal conversations that a non-running individual might not understand. I, myself, didn’t know all of these terms at first. As I got to meet people in different running communities, I learned about these terminologies little by little.

The list can be exhaustive as 100 terms to know in guiding you to your new running lifestyle, but we will limit the list below to 10 as these are the basic terminologies that every new runner had encountered of.

Below are some of the basic running terminologies that only runners will understand:

I remember seeing this in one of the running community Facebook pages I am a member in when I was training for my first marathon. The first time I saw LSD, I literally googled it to know more about it as I didn’t know what it meant.

LSD is a continuous run performed at a constant pace of slow to moderate intensity over an extended period of time.

Fartlek is a swedish term which means “speed play”. It is a form of interval run on different speed times which can be effective in improving one’s running speed and endurance.

When I’m doing Fartleks, I usually enjoy it because I can do the length of the fast run on what I feel I can do best, then turn to slow run, then going back to my moderate run. In the end, I feel that my run time doing a Fartlek is better than other usual training runs.

Every run is not easy!

However, as I have more formal training with a running coach, I have learned that there are different types of running speed: Fast, Moderate, and Easy. From the word itself, the Easy Run is the easiest run that you can do on your current capability as a runner.

You don’t have to compare with others as you might have a different running capability. Easy Run can also be a Recovery Run. Recovery Run is usually done one day after a long run or a marathon.

It’s also one of the terminologies that only runners would understand because you run to recover from a run? Isn’t it ironic? Some people might ask.

Most often than not, most runners still push themselves even on easy runs. An easy run is included in the training because of its varied benefits. Easy running enables your muscles to heal. It enables you to recover from pushing yourself too hard from all those fast to moderate speed runs.

Personal Record (PR) or Personal Best (PB) is your best performance in a specific distance as measured by the time you completed a run.

So, if I targeted for a new PR for my next 5-kilometer run and actually achieved a new record, say for example, I was able to finish it by 21 minutes.

Then I have a new PR which is 21 minutes.

This is my favorite part, and I know most of you will agree with me. Carbo-loading or Carbohydrates Loading is a food-intake strategy used by endurance athletes, usually one week to five days before a big race.

When athletes are in a carbo-loading stage, they try to get as much as glycogen as they can to store in their muscles or liver. If you will remember from middle school, glycogen is a form of energy in animals, fungi, bacteria, and us — humans. In humans, glycogen is made and stored primarily in the cells of the liver and skeletal muscle.

Enough carbohydrates is one key component to fuel your long run so you don’t feel depleted during your marathon. Most of us eat rice, pasta, potatoes, and other foods that are high in carbohydrates before a long race such as a full marathon or an ultramarathon.

I, myself, eat lots of bananas one week prior to a big race. You will need to have as much energy as you can store to cover the entire 42.125 kilometers for a full marathon.

In theory, tapering is one of the most important parts of your marathon training. Tapering, aside from cutting back on total weekly mileage is also, sleeping in, and eating (carbo-loading).

However, most runners forget to include tapering as part of their training and regret that decision later on. Tapering is where fatigue muscles recover, it is a time when the carbohydrates become glycogen stored in the muscles and liver which serves as your stored energy during the marathon.

Tapering is a time for full recovery from previous hard workouts that runner has done.

Chafing is a blistered skin caused by prolonged friction on either clothing-on-skin or skin-to-skin rubbing. I first experienced this on my first 32-kilometer long run.

I used a newly-bought running attire for the first time so I can practice whether it will be suitable for my first 42 kilometers. After running more than 2 hours with the new clothing, I can already feel something is painful at my armpit.

The pain is tolerable so I was still able to finish my long run assignment but during my shower, it was then that I really felt the pain of having a blistered skin that I have to shout while showering!

Pace is how fast can you run a certain mile or kilometer.

Pace is usually expressed in terms of minutes per mile or kilometer. When I was a beginner, I don’t give a damn on whether how fast or how slow I am as long as I finish the race injury free.

As we progress towards running as a sport, we tend to measure our progress based on our pace. And sometimes, even apologize for being too slow as compared to other runners.

While it is good to be always improving, let’s not based our overall fitness improvement just upon our pace. As we gain fitness, we will naturally speed up in the process.

Several reasons may contribute to these events such as undertrained, uncalculated race course challenges, unfamiliar or accidents that happened along the way… But in my personal opinion, DNF is more painful than a DNS.

I, myself, experienced a DNF and it is one of the races that I am sure I will never ever forget.

As you run more, you learn more about the sports and how your body responds to it. The terminologies you used to have no idea of are now part of your everyday life.

Try to get as much knowledge as you can from coaches, running friends, running groups, as well as books, websites, and other resources.

The more you know, the more you realize you don’t know. Never stop learning and keep on improving.