In Good Company: 5 Reasons to Run with a Team

Being a part of a running team is a sure interest among avid running enthusiasts in the country. In fact, the number of teams has grown exponentially since the running craze hit the Philippines a few years ago. While many Filipinos became rapidly engaged in an active lifestyle, others pursued the sport by being affiliated with other social circles who share the same passion. The consistent attendance of various running teams/groups during races and fun runs gave the local running scene an image of a more competitive and sociable sport.

But what would you necessarily gain by finding and joining a team or a running group? Here are the some reasons why you should consider it:

1. A team develops your sense of accountability.

One of the most important facets of running with a group is the collective effort exercised for the development of all of its members. In return, all members respond with the right amount of dedication, attitude, and perspective. “Our team conducts weekly trainings to keep us focused and continue to improve our performance.” says Desrei “Dessy” Balla, a licensed physician in Quezon City and a member of Team Run Direction.

Unlike times when you have the exclusive freedom to skip training, being with a team enables you to share a strong commitment among other members. You become a part of someone else’s training, thus making you more responsible in monitoring your own workout. The team’s vision becomes yours as well. “All of us show support by actively participating in team sponsored activities and encouraging other members to become better runners.” Dessy added.

2. A team becomes your support system.

Joining a running group helps enforce your extrinsic or intrinsic motivation to push forward. According to Robert Weinberg, Joanna Butt and Briana Culp, authors of Journal of Intercollegiate Sport, the support of team mates is not only integral in mental toughness but is also essential to performing well. Knowing that your fellows and observers want you to succeed (positive social cues) actually drives you to achieve more. Just like the impact of home court basketball fans in a game projects a similar effect on runners with spectators around them.

“Honestly, there were many times that I wanted to stop and puke on the corner during our interval training. At those times, my teammates became my immediate cheerleaders.” says Toni Ancheta, a member of the Agusan Road Warriors and a proud mother of two. “It really helps when I hear them say ‘Konti na lang, bes! Abot mo yan!’. I feel inspired to make them proud.”

You have a team, in addition to your relatives and loved ones, who keeps you striving to become stronger and better.

“There is a phenomenon of running with people where you run faster and easier.” says Rob Udewitz, a sports and clinical psychologist in Manhattan. This phenomenon is called “Social Facilitation”, or exerting a better performance when in the company of other people.

Martin Remos, a 25 year-old training assistant at P&A Grant Thornton in Makati, recounted his experience after joining a long slow distance run with Team UCY. “I gained noticeable developments after running with a group at the same pace.” shared Martin. “Running with the group (Team UCY) felt like we have this shared discipline to keep up with our group’s pace.

Personally, it made me run longer and farther. Unlike before, a 10KM distance felt short while 21 KM run didn’t feel like a 3-hour run. I definitely run better now.” 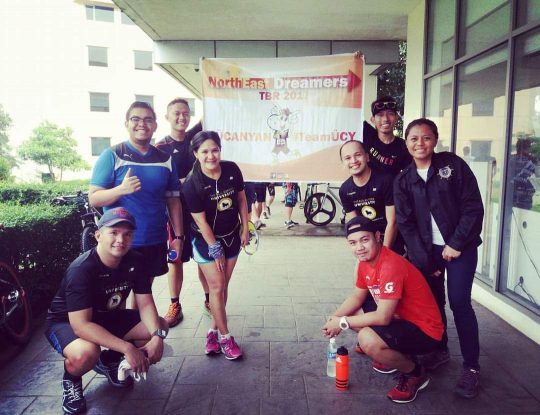 4.) A team helps you learn FASTER and BETTER.

Getting firsthand tips and advises becomes more accessible for beginners who join running groups. Not only that you learn trivial knowledge about the sport, you also learn from the wisdom and experience of seasoned runners around you. This is why most successful runners run and train with groups.

The Lazy Runner, in his article Why Join A Running Club, admitted that “The best advice and ideas on running I have had over the years has more often been from my running buddies rather than all the work and education I have had in the fitness industry.”

In most cases, rookie members tend to gradually assimilate the practices and mindset of those members they look up to in the group. This behavior paves way for an accelerated improvement compared to average beginner runners. 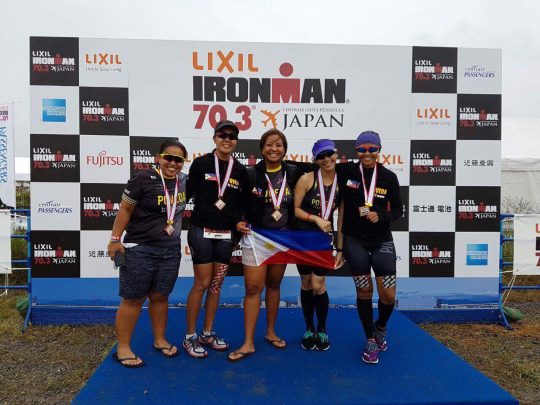 Kacci Santos (second from right) at the Iron 70.3 with the Poveda Tri-Team

Local fashion designer and Poveda Tri-team member Kacci Santos compared her habits before and after joining her team, “In the past, I thought eating less would make me faster and lighter. Having massages, ice baths, recovery workouts, and rest were not in my list. When I got a coach and started training with my team, I learned how to properly recover and put premium in my nutrition. They taught me that nutrition and recovery are just as important as my training.”

5.) Finally, you become a part of a BIGGER social circle.

This is a phase when running goes beyond the context of “sport”. It becomes a bridge that connects you with other people. You get to meet different runners from different walks in life. 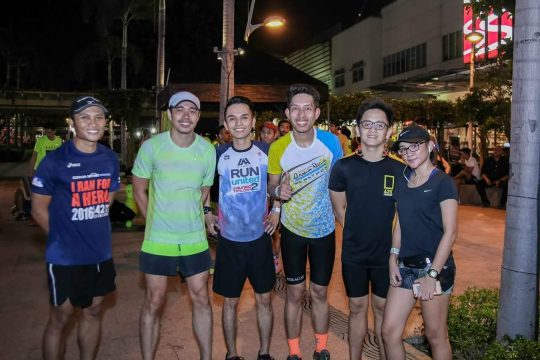 “I easily felt at home.” says Ramir Mondoy, a business associate in Cainta. “A friend of mine invited me to join the Nike Run Club in Bonifacio Global City. I didn’t expect the runners there to be courteous and friendly! I also got the chance to be closer with my batch mates in TBRM (The Bull Runner Marathon). Foreign and local runners interact with each other. Coaches and Pacers are very hands-on in organizing and monitoring runners. It was a great experience over-all.”

At the end of the day, all runners have their reasons on why they run. Others perceive it as an exciting ride that they want experience on their own, while there are some who would like to share their journey with others. The most important moral to remember is that we are all a part of a big and happy community. Cheers to all runners in the Philippines!