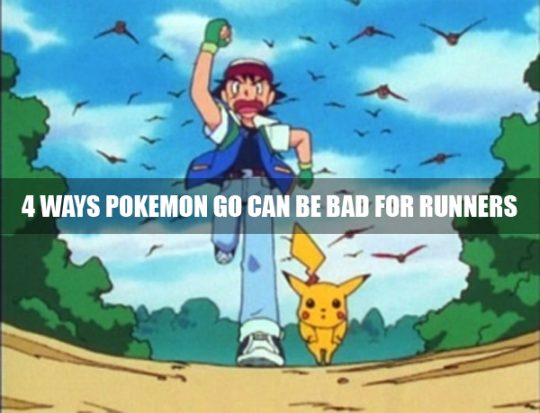 4 Ways Pokemon GO Can Be Bad For Runners

Are you one of those who has to catch them all? Fans of Pokemon GO have praised the app, saying that it actually encourages people to go outdoors and move, encouraging them to be more fit and healthy. In fact, a lot of people play the game while they’re out during runs, hoping to catch a Charmander or a Pikachu in Poke Stops in places like QC or BGC.

But honestly, it’s good that the app gets people moving, but we think for seasoned runners, the app can actually be bad for your training. Here are reasons why.

1. You’ll be more prone to Injuries

We’ve seen many Pokemon GO players focusing all their attention to their phone screens that they aren’t aware of their surroundings. If you’re one of them, you might bump into something/someone, trip, or wall, which could twist and sprain your ankle. Suddenly stopping to catch a wild Pokemon can also increase the probability of injury as well. You would have to stop working out for a while.

2. You won’t be able to use your Running Apps

We’ve tested it, that looking for wild Pokemon’s and hatching eggs means the game needs to be open, so if you use any running apps when you’re training, it will have to take a backseat. Or the alternative would be for you to invest on a separate running watch.

3. It distracts you from doing Tempo runs properly

Runners playing Pokemon GO abruptly stop while doing their run to hang out at Poke Stops to collect Poke Balls, catch wild Pokemons or take advantage of lures. Tempo runs can easily become leisure runs, and it’s easy to lose momentum and sometimes it causes the runner to quit their run altogether.

4. You don’t get to bond with other Runners

Part of the joys of running is sharing the experience with your buddy or with other runners. Being glued to your phone keeps you from socializing and enjoying your run to the fullest.

The bottom line is, focus on your training when it’s training time – you can always play Pokemon GO after.