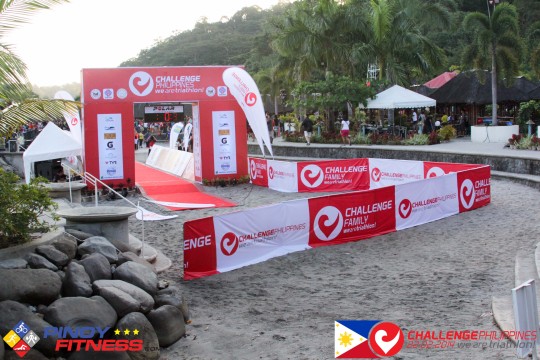 Challenge Philippines – billed as the toughest half distance in the world. This is my race report.
Words by: Don Menebo

The 1.9km swim began with a beach start. A big field of pro men including “Macca” toed the line. The age-groupers like myself stood eagerly on the sideline, waiting for the pros to start. While the pros engaged in small talk at the line, the horn blew cuing them to go. Amusing to see Macca’s face, startled by the sudden start, change from a friendly casual disposition to a fierce game face in about .01 seconds. And they were off.

The first wave of age-groupers started a mere two minutes after the female pros had gone off. Before we could position ourselves at the starting line, the horn blew and we too were off.

As expected the first 200-300 meters were frantic; heart rate spiked up, strokes are fast and choppy, kicks are frenzied. There was, however, plenty of space – not too much jostling; it was a very ‘friendly’ swim. A good thing too as the sight under water, with two wartime shipwrecks and teeming aqua-life, was nothing short of spectacular. 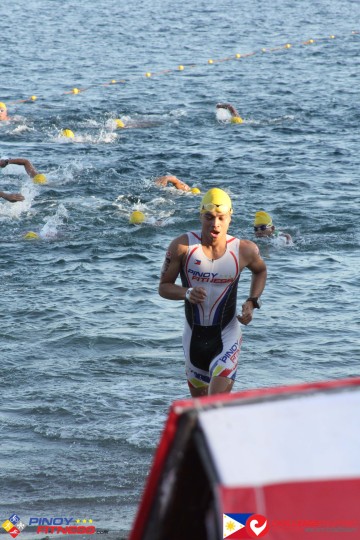 I’m a modest swimmer at best with poor navigational skills. Hence, I rely mostly on people around and in front to guide me through the course. Even then I found myself swerving left, losing contact with the swimmer ahead, and therefore having to constantly make directional corrections. I probably added 100m to the course because of this and it showed with my worst half-distance swim time.

In transition, an official video cameraman hovered over me as I put on my bike gear. This was awkward: to begin with I’m no TV guy, second, I’m not graceful in transition or at all for that matter – fumbling around with my helmet, sunglasses, socks (yes I put on socks for the bike leg to prevent the repeat of blisters I suffered during Ironman 70.3 Cebu). For the sake of the viewing public, I pray that this gets left on the editing floor.

Out of transition and unto the 90km bike, we are immediately met with a moderate uphill climb towards the main road. I couldn’t get my feet into my shoes as I had to constantly pedal otherwise I’d stall out. Once on the main road, I was able to take care of that.

I’ve ridden this course a couple times and knew what to expect including the bone jarring ride along some areas of the course. It was great to see that some of the crater-sized potholes and worn portions were freshly patched up just for this race. Still my teeth chattered and my bike made unnerving noises such as chain slap on the rougher sections of road. Nevertheless, I bombed down the descents, confident that my trusty aluminum bike would hold up. 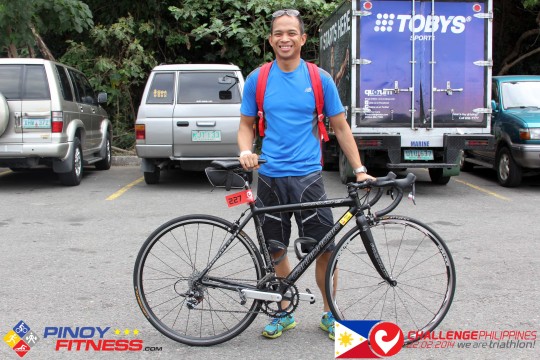 I absolutely adore my bike but I wish at certain times I had a carbon roadie with a more touring-type pedigree that could soak up bumps and road noise because with 20km still left, my hands, back and neck were screaming in pain begging me to get to transition and off the bike.

I planned to take the first half of the bike course (to the turnaround) fairly easy and progress to a harder effort on the way back. I also planned take the hills harder so as to compensate for soft-pedaling on the down hills. With the exception of the back and neck pain, probably attributable also to a poor (trial and error) bike fit and lack of long rides over 4 hours, everything went according to plan. In fact, I may have gone too easy on the climbs because to be sure that I’d make it back not completely spent, I found myself being too conservative on the climbs at times. But adage “easy does it” is a sound advice on a course like this.

In terms of nutrition, I planned to take gels, GUs in particular (my favorite flavor is lime), once every 45-50 minutes. Because of low team stock, I had to get another brand the night before to supplement the five or six GUs I had. Knowing that the run would be hot and that I’d be out on the course for over six hours, I drank water liberally. These two choices will become relevant on the run. The bike course had ample hydration stations with water, Gatorade, bananas and other foodstuff. Hand-offs were smooth and the volunteers were great.

The crowd on the course was electric; school children, villagers, marching bands were out in droves to lend their support by cheering, shouting words of encouragement, and high-fiving the participants. And even though I’ve ridden this course before, I still marveled at the beautiful vistas overlooking the West Philippine Sea, the cool forest canopies, and the magnificent rice fields. It is no wonder that many foreign participants raved afterwards about not only the difficulty of the course but its natural beauty – it made for a unique and an unforgettable experience.

The course demanded all of my attention as the descents were fast and treacherous (I saw at least one rider down from overshooting a sharp descending curve). The hills, well, were hills. And there were lots of them, of varying length and gradient. Particularly notable is the climb in Bataan Techno Park – it is unforgivingly steep and hot with no trees to hide under. True to its name, the last climb going back to Subic dubbed as “Karaoke Hill” made riders sing, or hum in my case, in an effort to forget the pain. It didn’t help much. I was all too aware of the burning in my quads and the pounding in my chest.

For the last 20km of the ride, I traded places with a tall French guy – I’d pass him on the hills while he’d overtake me on the flats and downhill sections. He rode a Cannondale of a more vintage kind – no frills, just a purist bike with one lone steel bottle-cage. He rode in a style only a seasoned European cyclist could – graceful and effortless. He tucked tight on downhills and sucked the wheel in front of him, sometimes within the width of a finger. (Yes, it’s a non-drafting course, but who really cares, he was going downhill. Besides, it was cool to see someone ride a bike so smooth and so pro).

Finally, I arrived in transition some 3:37 hours after I mounted my bike. At this point, I’m not sure if I should be relieved to get off the bike or fearful of what’s next – a 21km undulating run through the forest. My lower back was killing me. I hobbled along at 7:00 min/km pace during the first 3 kms hoping the pain would subside. It did and I began to pick up the pace.

Running through the trails was neat, especially being greeted by Aetas positioned in various locations giving directions. The aid stations were abundantly stocked with Yellow Cab pizza, fruits, pastries, and of course water and Gatorade. The course was like a micro version of the bike course – lots of hills that beckoned your attention.

I thought things were going quite well, contentedly running at a comfortable pace then shortly after taking a gel (one that I had bought the night before and was not accustomed to) at roughly KM 15…. BAM! Stomach pain, bloatedness, nausea, increased heart rate, dry heaving, alternating hot flashes and cold chills. More disconcertingly, I stopped sweating and my palms felt dry and shriveled. I contemplated asking help from medics but I walked on praying it would go away. It didn’t.

It seemed like ages before I got to the next aid station and when I did, I doused myself with icy cold water and took a sip of cola – thinking the latter would help me burp and relieve the bloated feeling. It took a while for it to kick in, but it did help some. Still, I walk almost the rest of the way home to the finish line. With 500m left, I mustered some will to run and I crossed the finish line in 6:54:58 with a 2:33:57 run split, humbled but relieved. 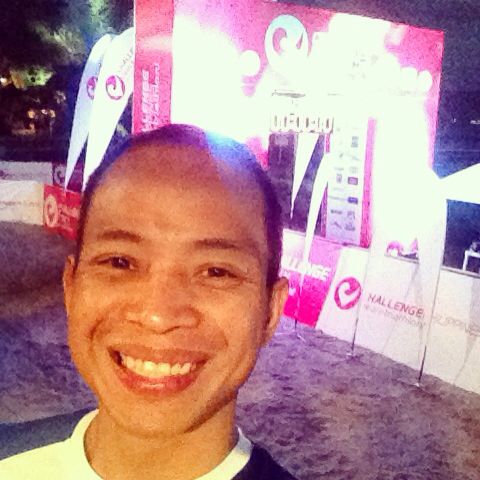 The Challenge experience sans the hiccup on the run was a thoroughly satisfying experience. For the $175 early bird registration fee, it was a bargain. I got to race on a very unique and one of the most testing course in the world. Word, I’m sure has gotten around and it won’t be a surprise if the number of participants doubles next year. I, for one, will be there.

Thanks Challenge for bringing a truly world-class event to our backyard. Thanks also to the Pinoy Fitness Tri team for their support and for providing much needed motivation during training lulls.