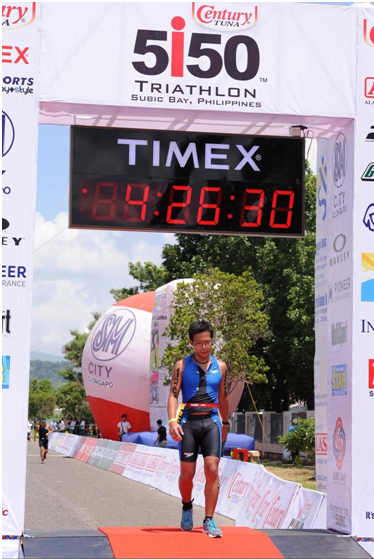 Sense of Accomplishment in finishing a Triathlon – Century Tuna 5150 Triathlon
by: Anthony Fusingan

The very first race I have ever joined in my life had been filled with lots of memorable new experiences. Everything was new to me starting from the Athlete Registration, race briefing, body marking, the final walk to the swim start, the actual race and reaching the finish line.

I am overwhelmed with the cheers of the people watching the race giving some encouraging words to further push myself and to some friendly athletes while in the race who gave me a pat in the back. Though I am one of the last finishers (Rank 413th) I am proud that I am part of the first Century Tuna 5150 Triathlon, completed the race and finish it knowing that I bested even a few fellow athletes on the swim, bike and the run leg.

I was one of those who were wearing the “white swim cap”, those individual who for some reason wanted to have special attention for the watchers during the swim leg. We were asked to jump from the barge 90 seconds before the gun start. I am a new to this so I am bothered by the other swimmers bumping me during the swim. I plan to swim beside it so I can just follow the rope till the finish line, but when submerge in the water I can’t see the rope clearly so I kept on hitting the rope with my arm. Looking around I saw some swimmers doing the breaststroke so I decided to try breast stroke instead of freestyle. But since this is not the stroke I practiced in my training I was slow and I got a leg cramp. I grab the rope and relaxed my leg for 1 minute or so and I start swimming again using freestyle to avoid the cramp. After several minutes I got leg cramp again in the upper leg so I started to swim breastroke again. I started to worry about the cut-off time. My time to complete 1.5km in the swimming pool is 45minutes but because I spent several minutes resting I am worried that I might not have made the cutoff. At last I saw the end of the line, still worrying about the time I tried to listen to the announcer if he was saying something about the time or maybe doing the countdown already. I tried to swim faster and I as reach the shore I heard the announcer saying that number 136, “Toni” had made the swim cutoff, I saw then the Timex time and it is past 53 minutes. I am happy, congratulate myself, thank the lord that I made it and I will get to experience the bike leg which I expect to be a very nice ride. I was moved by the people watching in the beach, giving encouragement. 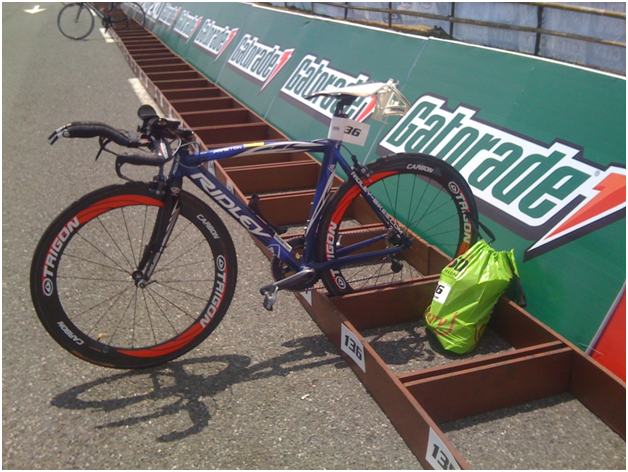 I may say that the bike course was challenging enough for someone like me who is new to this. I liked the experience of cycling through the airport. For me the best part of the bike route was the experience of riding down the hill at a speed I never did before. There were a few of us who were just starting the bike leg, I was one third on the bike route when I started to see the group of bikers leading the race going back already. Other strong bikers also started to rush downhill while I move slowly climbing. I can’t forced my legs to go on any faster since my legs still hurt because of the cramp during the swim. I pass several climbs and had enjoyed downhill and my bike’s speedometer indicates that I am few km away the end of the bike route when I saw another uphill ahead of me. My legs started to hurt again as I climb slowly. A fellow biker speeding up behind me greeted me and said that his bike gears were having trouble so he could no longer change gear and he climb fast as if it was just a flat road leaving me behind. Finally, I was few kms away to the Convention center, I pedal as fast as I can to the wide paved road to transition 2 and I pass RK hotel where my family was waiting to see me. They were happy to see that I am still in the race. Near the Convention center, a group of young musicians was playing nice music which adds to my spirit to keep on going. As I slow down, the lady in the transition two smiled, greeted me, and said “Good job, what a piece of cake”.

I parked my bike, grab my run-gear bag and drank the Red Bull energy drink I reserve for this moment for one more burst of energy to complete the last leg of the race. I learned that it is a little difficult to run after biking for 2 hours so I started to just walk fast for the first km. I was approaching the RK hotel when my 7 year old son saw me and shouted happily, he handed me the mineral water he was carrying and I continue to run. I like nature so I enjoyed running inside the Golf course. There were few of us running slow back to the finish line. I decided to run a little faster to overtake just a few of them so that I will not end up last. As I run to the finish line, I am feeling happy, proud that I did it even without much training, feeling a sense of accomplishment and thankful also that I did not quit when I was cramping in the swim :)