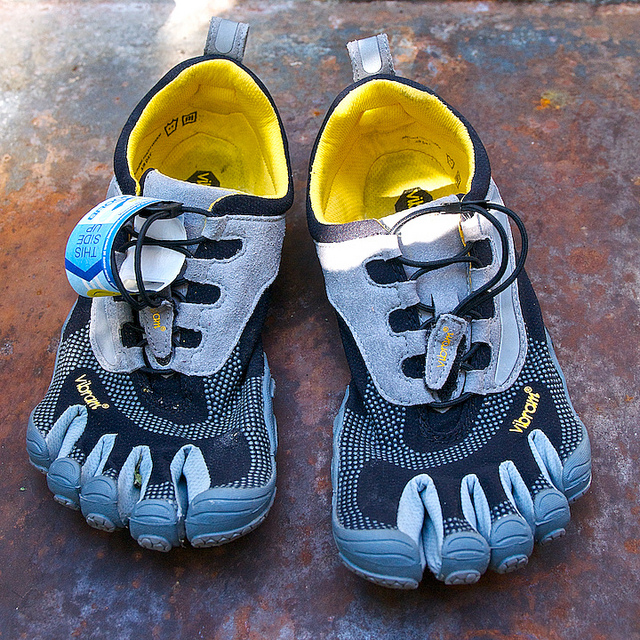 Let me start with the usual CYA* clause. I am no doctor nor a physical therapist nor some sports medicine expert. What I am about to say is my own personal experience.

During one drinking session with a college buddy of mine, he introduced me to the book “Born To Run” by Christopher McDougall. There I learned about barefoot running. I heard about barefoot running through famous athletes like Abebe Bikila and Zola Budd, but I dismissed the technique as mere eccentricities. According to McDougall, the modern running shoe, which was invented by Nike co-founder Bill Bowerman, had conditioned runners to run in an inefficient manner by landing on their heels. McDougall continues to elaborate that the heel was not anatomically designed to absorb hundred of pounds of force, that landing on the heel puts an immense amount of stress on other parts of the body, and that the midsole—i.e., the arch of the middle foot—is nature’s greatest shock absorber. An arch is supposed to be stronger as more weight is placed on it. So instead of wearing running shoes that forced you to run on your heels, why not switch to shoeless running or running with minimalist gear and adopt a more natural, midsole running gait?

At first I seriously doubted the claim, but somehow the thought-process seemed logical. And there was some scientific research to back it up.

Now I am sold on the concept. Nowadays, I rarely use traditional running shoes. Strictly speaking, however, I am not a barefoot runner. I describe myself more as a minimalist runner. I am a proud owner of not one but two Vibram Five Finger shoes—a black KSO (my friends describe it as the “Gollum Shoes”) and the Bikila LS. The latter is what I use for my running. As much as I would like to run sans any kind of footwear, I am hesitant to go totally barefoot for fear that I may step on screws or shards of broken glass and injure my feet. The Vibrams are like gloves for your feet. They do protect you from whatever debris is lying on the ground. They have shops in Shoemart MOA and Rockwell. They are extremely light and comfortable. The only problem is that they really look silly.

One thing is for sure: it will alter your form in running. You can’t land on your heel. It is too painful to heel-strike. I read that this shift from heel strike to forefoot strike may not come automatically and that some may take as long as 6 weeks to adjust. For me the shift happened just after just a few meters, except mine was more of a shift to a more midfoot strike. My stride also naturally shortened, landing closer to the vertical plane of my body, and I was taking more steps. There are many sites that claim that a shorter, faster stride (to the tune of 180 strides a minute) is less stressful and thus can help avoid injury. The trick, they say, is to imagine yourself running on a bed of hot coals—your feet should barely touch the earth and even before they do, you should already be preparing to push forward. And did I feel any after-effects? With traditional shoes, I would normally feel pain in my hips after a run, a pain that at times would cause me to toss and turn in my sleep, looking for the right position to ease that discomfort. But since I switched to minimalist shoes, the pain miraculously disappeared.

The run itself was literally pain-free. I felt no jarring shock to the joints. The sensation was, in fact, quite soothing to the soles, very similar to that of those reflexology sandals. Moreover, running felt more stable with minimalist shoes. When I would run with heavily padded shoes, I felt my legs wobble. With minimalist shoes, I felt the ground. I felt every crack and indentation. And yes my mind would react with an internal “Ouch!” when I would step on a few loose pebbles, but that mild pinprick sensation was fleeting and dissipated as soon as I took the next few steps.

Many barefoot pundits claim that there is no proof that heavily-padded, so-called high-tech running shoes protect you from injuries. And there are a few scientific studies that can attest to this. Many experts are now questioning and challenging the marketing claims of the big running shoe manufacturers. Check out the story of Reebok, whom the FTC investigated for the shoe company’s allegedly false claims that its toning shoes and other products strengthened muscles.

It was about February when I first wrote about barefoot/minimalist running at my blog. Back then, I was relatively new to minimalist running. I had described the experience as mystical and holistic as well as raw and primal. Since then I have run in various 10Ks and 21Ks in Vibrams. I am now afraid of running in anything else but Vibrams. Gone is that feeling of tenderness in my sole that I had described. I feel lighter and more comfortable. Indeed it felt more natural and, just as the book said, the way I was born to run.