Registration.  My running buddies and I went out to Shangri-la on the first day day of registration.  We were supposedly to register some of our friends as well.  Surprisingly, they ran out of race packets in the first 3 hours.  We only managed to get the last three 21k race kits and the last 10k packet.  It seems that the “first come, first served basis” wasn’t true.  It was more like “is it your lucky day today then go and register” basis.  We weren’t able to register five of our friends.  The registration personnel told us that the race kits were being distributed to each store on a limited supply per day

Finisher’s Medal.  I’ve already posted here that Adidas announced that all distances will have their chance to get a medal.  This made a lot of runners even more eager to register.  But I guess they had to swallow their own words as they retracted their original statement and limited the medals to 21k finishers only

Buffet.  I guess taking back their words was a fad and did not end with the finisher’s medal.  Perhaps they’ve realized how chaotic it will be if Adidas will prepare a buffet for everyone.  Would have been a logistical nightmare.  Also the possibility of the 21k participants running out of food.  It was later changed to a packed breakfast.

Parking.  No advisory was given.  Or were they assuming that the participants can take care of themselves?  When I arrived at BHS (a few minutes after 5am), cars were already lining up just to be able to park.  It was crazy!  Parking was so scarce and difficult to get a spot that there was even 3 to 4 vehicles that was caught up on the road by the 21k runners

Baggage Area.  I have no personal experience.  But when I saw Rolly in the assembly area, a running buddy, he uttered “parang hindi organized, ang gulo dun sa baggage area”.  Later in the day, I learned that there were only a few people manning the baggage station thus causing the long line.  Also some bags were lost because they allowed runners to go inside to pick up their stuff

Assembly Area.  The 21k runners are now inside the assembly area while I was still scrambling to locate the entrance.  When I got there, the 10k runners were now occupying the back area.  Question in my mind was, how do I swim through these people?  I had to resort to saying ‘excuse me’ and ‘sorry’ every 3 seconds so that they’ll let me pass, a similar situation I had in Globe Fun Run.  They should have placed a lane where latecomers can easily pass through or do not allow the other distances to pile up at the back like what Nature Valley Run did.

Minutes per kilometer.  Noticed that the assembly area was divided into four sections depending on how fast you can run.  And there were designated pacers (5 min/km, 6 min/km, 7 min/km, 8 min/km) assigned.  Those were the guys (or gals) that had the blue balloons attached on their shirts.  A pacer’s role is to be able to cover a distance (1 kilometer) on a pre-determined number of minutes.  Example: a 5 min/km pacer will need to run a kilometer in 5 minutes

For me, the pacers was a nice touch to the event.  Especially when the partial road closure was only good for 3 hours

Sad part is, most runners doesn’t seem to understand their purpose.  Or some just care about crossing the finish line on a specific time and failed to understand their average running time per kilometer.  Moving up near to the starting line doesn’t really help in any way and just impedes the faster runners in the process and may cause unforeseen accidents

Here’s a quick and dirty guide for everyone’s perusal

So if you are aiming for a sub-2 (crossing the finish line in less than 2 hours) on your next 21 km race, better put yourself somewhere in between the 5 min/km and 6 min/km pacers.  I hope (and pray) that this table will help most, if not all, runners where to position themselves in the assembly area

Assembly Time and Gun Start.  For 21k runners, assembly time is 5 o’clock in the morning wherein gun start commences after 30 minutes (5:30am).  My only wish was for it to start a bit earlier, say move the gun start to 5 am.  Why?  We don’t want to be exposed  to be under the sun for too long.  Usually sun gets too hot by 7am and the glare is unbearable

My Agenda. I really wanted to cover the distance in less than two hours but I have been under the weather for the past week.  A bit scared if my body will be able to cope up with the long distance.  So to be safe, I positioned myself between the 6km/min and 7km/min pacers.  Adidas KOTR was actually my 3rd 21k run but the 2nd race was short by around 800 meters so I couldn’t count it under my belt.

And Off We Go!

When we were set off, right then and there I’ve decided to run along with the 6min/km pacer.  My intention was to run side by side for the first 3 kilometers then run a notch higher for the rest of the distance.

The first kilometer was a breeze until we ran into the “trail” part.  Potholes were everywhere in Meritt Rd.  What made it worse was rain showers occurred that night and filled those holes with water.  Making it a bit difficult to maintain my established pace.  After a few strides, I got through safely and continued running for the next 2 kilometers

Kalayaan flyover. It was nice running again in Kalayaan flyover.  It offers a good challenge to any runner.  Also I noticed that its becoming rare to see races that covers this structure.  My last run here was at the Robinson’s 3rd Buddy Run. The descent from the flyover was a bit of a challenge because there was lots of stones scattered.  As a barefoot/minimalist runner, this requires a gentler foot landing and consciously avoiding the bigger rocks

Turnabout. The second turnabout was in University of Makati.  I noticed that no one was handing out nylon cords to the participants to mark that we’ve reached to the correct turning point.  Same thing also happened in Bonifacio triangle, first turnabout.  No marshall was present to give us the cords.  I begun to ponder how easy it would be for any runner to cheat on this race.  Does Adidas expect that all runners are honest?  I had personal experiences where I’ve seen some runners cutting corners and sharing loop cords.  Also, no mats was placed to record your split times.

I was now traversing on Gil Puyat Ave and on my way back to Fort Bonifacio.  I noticed that the 11th and 13th-km markers were placed erroneously along the route.  I realized this because my split time between 9km and 11 km marker was just over 6 minutes.  Also had a similar split time between 11 km and 13 km marker.  It would have been impossible for me to cover the distance in such a short time.  This was confirmed when a fellow runner, who was sporting a GPS-enabled watch, uttered that the 13 km marker was placed when it only registered 11.5km on his timepiece

Traffic management.  Was about 600 meters away from Kalayaan flyover and saw the huge number of runners that filled up the entire bridge.  The 2nd turnabout of the 10k runners was placed at Paseo de Roxas.  So, again, the 21k runners had to run a single file again.  Once more, I had to decrease my pace.  Reminiscent of what had happened on Meritt Rd.  The organizers (eXtribe and Primetime) should have managed the flow of the runners, in order to minimize any possible traffic it may cause.  I mean, no matter how you look at it a total of 5,400+ participants (10k and 21k runners combined) sharing the road will be chaotic

Two hydrogen atoms chemically bonded to an oxygen atom.  Water is the most abundant compound on Earth.  Unfortunately, this statement was false during the Adidas KOTR event.  I was still able to grab a cup of water at the hydration station near Paseo de Roxas.  I was looking forward for another shot of water near 32nd Ave and Rizal Dr.  Unfortunately, the cup that I grabbed from the table was empty

Even though my last drink was only 12 minutes ago, my reserves was running low.  And just thinking that I had to run 2 more kilometers made me even more frustrated, more tired and more thirsty.

Temptation.  This was the first time that I got really tempted to pick up some half-full sports drink, that was left by the other runners, on the curb.  I even entertained the thought of asking a fellow runner if s/he can spare me a drink out from his/her hydration flask.  I guess my survival instincts kicked in.  For me, it was the hardest, mentally challenging, and longest 2 kilometers that I’ve ran.  And like a mirage in the dessert, i saw the next water station near Essensa.  My thirst has been finally quenched!

Pain is temporary, quitting lasts forever.  I continued running to conquer the remaining kilometers.  Thankfully there was another water station at the last turnabout inside Bayani Rd, and at that point there’s 3.5 kilometers more in the race.  Pretty aware that I lost my steam already.  Getting the sniffles somehow took its toll on my body and on top of that, my stomach has been acting up even before the race has started.  But there’s no point in quitting now

On my way back, the Essensa hydration station ran out of water.  I just grabbed some water from the drum and poured it onto myself.  And with the remaining energy I had in me, I ran with all my might and managed to cross the finish line safely and with a smile on my face, and with a finisher’s medal on my neck

Beneficiary.  HOPE worldwide Philippines, Inc. has established a model child welfare and protection system for Filipino Children in Especially Difficult Circumstances (CEDC). For more than a decade, it has provided essential medicines, supplies, professional services and most importantly caring full-time staff and volunteers who work directly with poor children.  Adidas generously awarded the institution with P150,000

Disclaimer: This review is coming from Barefoot Daves a 21k runner, and some friends who participated.  It does not necessarily reflect/represent how things went to the rest of the participants.  This was his first time to join KOTR. Visit his blog @ https://barefootdaves.blogspot.com 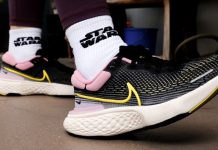